- The reel may take some getting used to for first-timers.

- The packaging of the product may not work as well as you'd like. 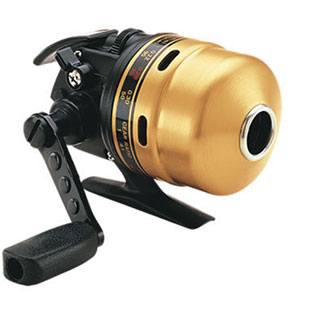 This reel is compact, but it packs a big punch. It can handle anything you can reasonably put it through. It has a durable aluminum frame with a protective finish, so you won't have to worry about damage.

It also has a machined spool and anti-backlash control to make wrestling saltwater game a little bit easier.

Punching in at 16oz, this reel may not seem like much. However, it's going to have your back when you're fighting a big catch. Don't judge it by its size and weight, though, because it can meet your expectations and more.

This reel works much like a bait casting reel, though there are some differences. Conventional or trolling reels are not meant for casting, and they are usually rounder to allow for more line.

Conventional or trolling reels are meant for catching big game in the open sea. When you're trolling for migratory fish, a conventional reel is your best bet. When you troll fish, you drag your bait and lures behind a moving boat. This endeavor requires a strong and durable reel, and the Daiwa Saltist Black Gold Conventional Reel is more than up to the challenge.

Troll fishing can be expensive, because it entails the use of a lot of fuel. Thus, you'd best use a reel that can make your trip out to the sea worth it. The Daiwa Saltist reel won't break the bank, but it's going to give you the most bang for your buck.

Your reel will be undergoing a lot during the process of trolling. Therefore, you need a protective reel frame that can withstand a lot of use without sustaining damage. Part of the DaiwaSaltist Black Gold Conventional Reel's appeal is its durability. With its anodized aluminum frame, you'll have a durable tool in your arsenal when you head out to the open water.

A great drag system is important because it stops your line from breaking. It overcomes friction in instances when the fish pulls strongly on the line, which big saltwater game are prone to do. You can therefore rest easy that your line will remain secure and intact. Since you'll be using your reel in a saltwater environment, corrosion is a real possibility. It's a good thing then that Daiwa uses corrosion resistant ball bearings (CRBB) made of specially treated stainless steel. These bearings are designed to keep sand, grit, and saltwater out. Anti-reverse is a common weak spot in many reels. However, it may be the Daiwa Saltist's best or at least most reliable feature. The reel's infinite anti-reverse creates no back play at all, which means that there is no line given back. It also keeps the spool from going into reverse while you're engaging the reel.

In the Daiwa Saltist, you can be sure that infinite anti-reverse will minimize shock to the reel, and no slack line will be released. The anti-reverse also kicks in right as you put the reel in gear.

All in all, this is a great reel for its price. It is made of great materials, and a lot of thought went into its individual components. Daiwa understands fishing and what avid fishers may look for in a reel. You'll surely be satisfied with how this reel works.